The world, the bike and the coronavirus 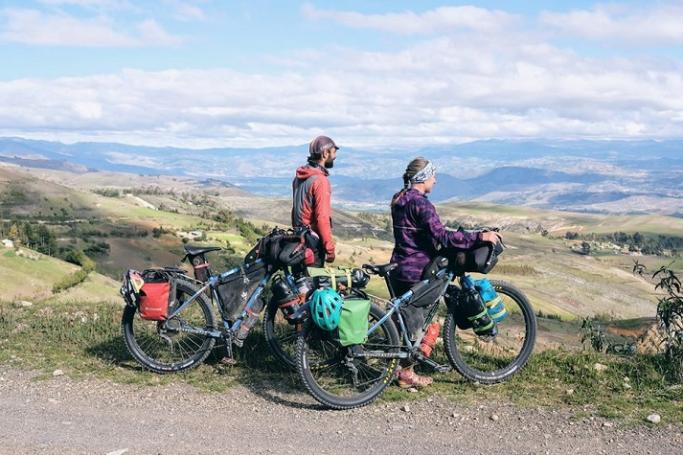 After almost six years, the coronavirus stopped their bike ride around the world.
From the seven Capitoline hills to the seven highest passages in the world, they ride
in the name of adventure, of love for Earth, of encounter, and, of course, in the name
of sustainable mobility. We followed the story of Simona Pergola and Daniele Carletti,
passionate Roman cyclists. The beginning of their adventure started with their
departure from Piazza del Campidoglio, on July 2014. In Peru after about 3/4 of the
initial project; the virus, that suspended everyone's life, forced them to stop. They
made the decision then, to return to Rome.

Here is their story.

"We would still have had to pedal from Peru to the southernmost tip of South
America, the Tierra del Fuego, and then Africa from south to north. I mean, we still
had a long way to go. By the time we stopped, we had cycled about 56,000 kilometers,
across 35 countries and 4 continents."

Is the decision to come back completely related to the virus or were you already
tiring of it?

"In these six years, a bit of everything has happened to us, from a bicycle’s theft to
Daniele’ atypical pneumonia and dengue fever, and we have never considered the
option of interrupting the trip and returning to Italy. Unfortunately, this new virus
has affected what was keeping our trip going: cycling freely between countries and
continents. Above all, contact with people and intimate sharing of spaces with
strangers. We don't hide the fact that the desire to return was latent anyway".

Was it more complicated to arrange the departure or return?

"Definitely more complicated the return for two reasons. Firstly, it was not planned
at all, so it was much more difficult to manage on an emotional level. Secondly, on a
logistical level it was difficult, since we had to prepare the luggage in a short time
and in a situation where many activities were closed".

What role will the bicycle play in the world to come?

"The fear is that as soon as the emergency is over and you can get back on the road,
cars will increase. From our point of view; however, the car is not the solution. On the
contrary. Not only because of direct deaths from road accidents, but also from
indirect deaths, such as those caused by pollution. The bicycle must necessarily play a
fundamental role when it will be necessary to start moving again, because it lets
people travel alone and therefore, it allows them to maintain social distancing. Bikes
also help us to move, strengthening the body and the immune system. They have zero
emissions and zero costs. So for those who, after this period, find a much smaller
deposit left on their bank accounts, bikes are fundamentally better".

Of course, what you proposed will require the right security conditions. Starting
from the experience of your trip, what would you suggest for passing this
period?

"Don't think of life right now as a simple confinement but as a totally new way of
living. If there is one thing that human beings know well; it is how to adapt. In these
years we have seen people living in places and in ways that we would never have
imagined. Even on this occasion, we are sure we will find a way to adapt. Simplicity in
everyday life can help us".